Honduras rout Jamaica 5-0 in in Concacaf U20 Championship 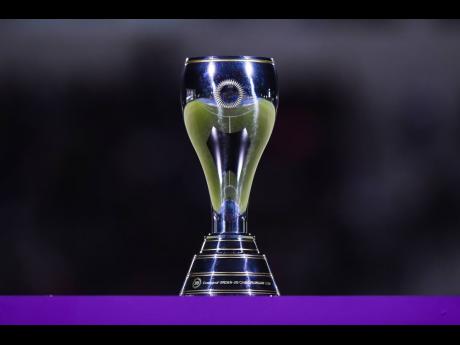 The Concacaf U20 Championship trophy.

Thanks to a relentless Honduran team, Jamaica's relief after salvaging a point against Costa Rica in their opening Concacaf Under 20 Championship game on Saturday was replaced with despair.

The young Reggae Boyz were trounced 5-0 by the host nation in their second group game tonight at the Estadio Francisco Morazan.

A brace from Marco Aceituno in the third and 35th minute, followed by goals from Issac Castillo in the 48th and Jefry Macias with a double in the 58th and 85th ensured Honduras's passage to the round of 16, leaving Jamaica's future in doubt.

The Hondurans would not need long to reward their home supporters and themselves for their early dominance. Geremy Rodas's cross found Aceituno who glanced his header past young Reggae Boyz custodian Coniah Boyce-Clarke.

Despite protests from Jamaica that the ball was out before the cross was made, the goal stood, putting the young Reggae Boyz in an early hole.

On a muddy pitch, the Jamaicans tried to find their rhythm and at times made the Hondurans uncomfortable through set-pieces and from distance. Tarick Ximines would try a long-range effort in the 27th minute but saw the effort deflected for a corner. The resulting set piece saw the ball fall to Tyler Roberts but his one-time shot went wide.

Despite moments of vulnerability from the Hondurans, it would be the host nation that would double their lead in the 35th minute. Castillo sent Aceituno through on the left-hand side and his shot went past Boyce-Clarke and trickled into the net despite the best efforts of Lamont Rochester to clear the ball off the goal line.

The young Reggae Boyz problems were further compounded in the third minute of first-half stoppage time when Rochester, who was initially given a yellow card for a challenge on Castillo on a breakaway was sent off after a Video Assistant Referee review for the denial of a clear goal-scoring opportunity.

Despite the halftime introductions of Chad James and Luis Watson, the numerical disadvantage would take its toll as early as the third minute of the second half as Castillo was sent through thanks to a great pass from Odin Ramos, went around Boyce-Clarke before squeezing a shot off the post and into the net for an unassailable three-goal lead.

Jamaica's defence wilted under the constant assault by the Hondurans and they would concede a fourth in the 58th, as Macias, who came on as a second-half substitute got past a defender and unleashed a shot that rocketed into the roof of the net. He would have his second five minutes before the end.

Despite the heavy defeat, Jamaica is still in control of their qualification fate as they only need to avoid defeat to Antigua and Barbuda in their final game on Wednesday to advance to the knockout stage.