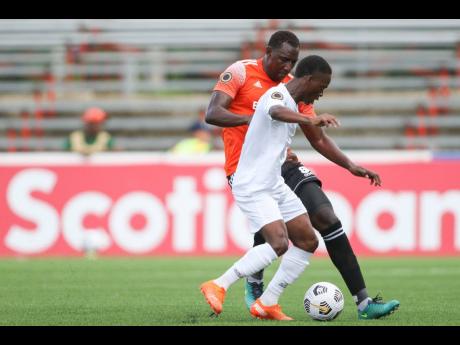 Dwayne Atkinson (right) of Cavalier attempts to get past Dairin Gonzalez of Cibao FC during the Flow Concacaf Caribbean Club Championship match held at the Cibao Stadium in Santiago de los Caballeros, Dominican Republic, on Tuesday, May 17.

Despite not finishing in the top three of the 2022 FLOW Concacaf Caribbean Club Championship (FCCCC), two Jamaican clubs walked away with top honours in the tournament.

Fourth-place finisher Waterhouse FC earned the Fair Play Award "in recognition of the exemplary behaviour that promoted the spirit of fair play and compassion in the championship", Concacaf said yesterday.

The top goalscorer of the tournament, meanwhile, was from Cavalier SC.

Dwayne Atkinson enjoyed a very impressive tournament for the Jamaican side as he scored a goal in each half of Cavalier's dramatic 3-3 draw with Cibao of the Dominican Republic to finish with a tournament-leading two goals.

Cavalier failed to get out of the group stage as a result of that match, as they had needed a win over Cibao to go on to the next round.

Meantime, the Best Player Award went to Elyvens Dejean of Haiti's Violette, who edged Cibao 4-3 in a penalty shoot-out following a scoreless draw in Sunday's final.

The midfielder finished the tournament with two goals in attack for the eventual champions. He had coolly converted his penalty in Violette's shoot-out win.

A 17-year-old striker from the Haitian side, Stevenson Jeudi, won the Young Player Award.

He scored two goals in Violette's 3-1 semi-final victory over Waterhouse.

He was superb for the host side, conceding no goals in the three matches in which he appeared during the tournament, including the semi-final and final.