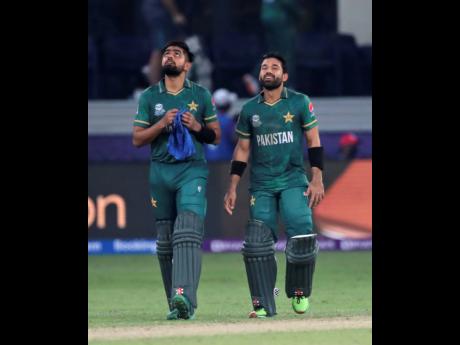 Pakistan crushed India by 10 wickets for the first-ever victory against their arch-rivals in a T20 World Cup game yesterday.

"We executed our plans well and the early wickets were very helpful," Babar said. "We weren't thinking of the record against India at all. I only wanted to back all our players who've been preparing well."

Babar won the toss and opted to chase. The decision paid off. Both Babar and Rizwan toyed with Indian bowlers as Kohli's men in blue struggled with the wet ball when dew settled in the second half of the game.

Earlier, Afridi's impressive burst of two quick wickets put India on the back foot from the onset. Kohli and Rishabh Pant (39) tried briefly to unsettle the attack with Pant hitting two sixes before he skied a catch to Shadab Khan (1-22) while attempting a sweep in the 13th over.

Pakistan's bowlers, especially Haris Rauf and Afridi, varied their pace intelligently in the death overs that didn't allow even batting maestro Kohli to accelerate. Kohli was finally undone by Afridi's slower bouncer in the penultimate over as he top edged a catch to Rizwan behind the stumps.

Babar and Rizwan were hardly troubled by either the pace of Jasprit Bumrah or the two spinners in a perfectly orchestrated run chase with the wet ball coming on to the bat nicely.

Babar reached his half century in style by lofting spinner Varun Chakravarthy over midwicket for a six before Rizwan raised his 50 with a pulled four off Bumrah in the 15th over.

Rizwan stamped Pakistan's supremacy in style by clobbering a six and two boundaries off Mohammed Shami and then finished off the game in the same over by scampering for two runs.

It was Pakistan's first-ever victory by 10 wickets against any opposition in a T20 while India also faced the ignominy of losing by such a margin for the first time.

The victory was Pakistan's first win against India in a T20 World Cup which dates back to 2007 when India won the inaugural tournament by beating Pakistan in the final. Pakistan won the 2009 edition.