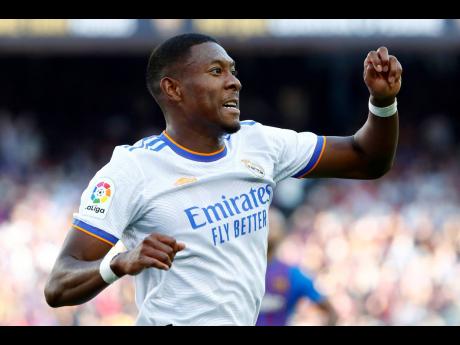 With Lionel Messi no longer around to save the day, Barcelona slumped to another painful loss yesterday when they fell 2-1 to their fiercest rivals at a packed Camp Nou.

Real Madrid didn't need a stellar performance by Karim Benzema to give coach Carlo Ancelotti his first win at this stadium. It was enough to let Barcelona flail against their defence, while defenders David Alaba and Lucas Vaquez chose when they could inflict damage by scoring goals in each half.

The win by Ancelotti's side will deepen the crisis at Barcelona, who have lost all their matches against major rivals this season.

The victory moved Madrid to the top of the Spanish league, level on points with Sevilla and Real Sociedad.

The defeat was another blow to Barcelona, who have struggled since financial troubles kept them from re-signing Messi and other players. Ronald Koeman's team was left in eighth place, five points adrift.

This was the first 'clasico' in a very long time without Messi and Madrid's long-time captain Sergio Ramos, former rivals who are now teammates at Paris Saint-Germain. The two, between them, took part in 45 editions of Spain's top rivalry.

The difference that Messi's absence makes was clear in the 25th minute when an attractive team build-up left Sergino Dest all alone in the area. The American, whose natural position is right back, had been drafted by Koeman into a winger position on the right side, where Messi had once tormented opponents.

But when a pass from Memphis Depay rolled on by Ansu Fati and reached Dest just outside the six-yard box, with goalkeeper Thibaut Courtois at his mercy, Dest sent his shot sailing high over the crossbar, drawing a collective groan from Camp Nou.

Seven minutes later, centre back Alaba turned goalscorer with a wonderful curling shot from the left side of the area that the outstretched Marc-Andre ter Stegen could not stop.

Vazquez added a second goal in stoppage time on a counter-attack, with Barcelona desperately thrown forward in search of an equaliser.

Sergio Aguero pulled one back for Barcelona on a cross from Dest in the final seconds.