No public risk from CPL – Rowley 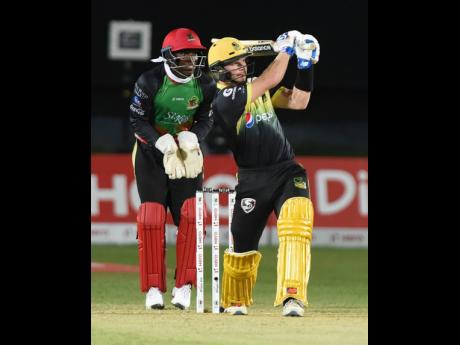 Jamaica Tallawah batsman Glen Phillips hits a six during his innings of 85 against the St Kitts and Nevis Patriots in a Caribbean Premier League (CPL) cricket match at Sabina Park on Thursday, September 19, 2019.

Teams and officials are set to start arriving in Trinidad today for the Caribbean Premier League scheduled to bowl off later this month but Prime Minister Dr Keith Rowley has assured the country that the staging of the Twenty20 franchise tournament would not pose a risk to public health amid the ongoing COVID-19 pandemic.

Rowley, currently bidding for re-election in polls carded for August 10, stressed that the August 18 to September 10 event would be executed inside a "bubble" at the Hilton Hotel with all persons involved subjected to the rigorous protocols already in place.

"Everything that will go on around the CPL will go on in a bubble that does not interact with the national population," Rowley said.

"[Arriving players and officials] would be coming into the country under the protocols of entry all having tested negative before. When they come here they are confined to the Hilton Hotel and that becomes a bubble for them."

Trinidad has been widely praised for its handling of the crisis, with only 173 confirmed cases and eight deaths so far recorded.

For the first time in its eight-year history, CPL matches are being played in one territory due to the COVID-19 outbreak.

Some 33 matches are set to be played behind closed doors at Queen's Park Oval in the capital and at the Brian Lara Stadium in Couva, located in central Trinidad.

Players will be tested

Players will be tested before departing their respective jurisdictions and then again on arrival here, and will spend the first two weeks quarantined.

CPL organisers said recently there had been close collaboration between their medical panel and the Trinidad and Tobago government and health authorities, in ensuring a safe bio-secure environment within which the tournament would take place.

"The CPL have worked with the Trinidad and Tobago Ministry of Health and the CPL's own board of medical advisors to create protocols which minimise risk of transmission of the COVID-19 virus to the population of Trinidad and in among those who will be travelling to Trinidad and Tobago from overseas," organisers said.

"Teams and officials will be put into "households" where social distancing will need to be in place. There will be smaller clusters within each household where these measures can be relaxed.

"However, if any member of this cluster display signs of COVID-19 at any time during the tournament all members of that cluster will be expected to self-isolate for a period of 14 days from the time that a member of that group first shows symptoms.

"All members of the CPL party will be subject to regular temperature checks and will be re-tested for the virus throughout their stay in Trinidad and again before departure."

Barbados Tridents, led by Test captain Jason Holder, will defend the title they won last year when they stunned Guyana Amazon Warriors in the final.

TKR clash with Amazon Warriors in the tournament opener on August 18 at the Brian Lara Stadium.