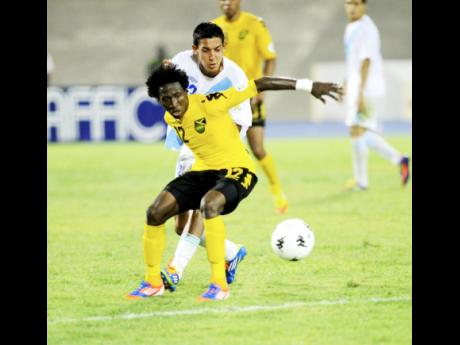 Demar Phillips has had many outstanding moments representing Jamaica in international football, but his most memorable time came in his first match for the senior Reggae Boyz team, he told STAR Sports.

The speedy left-footer came on as a substitute in an international friendly against Canada in October 2006 at the National Stadium and immediately made an impact for the then Carl Brown-coached team.

"I was just coming into the side. Shane Crawford got injured and Carl Brown said that I should fill in at left back because I am a left-footer, even though I was in the team as a midfielder," Phillips said. "We were down one love (1-0) and I assisted Jermaine Hue for the equaliser and scored the winner."

He continued: "That match told me a lot about myself."

The St Thomas native went on to have many other great games donning the black, green and gold.

He was selected player of the tournament for Jamaica when he scored four goals in the 2011 Concacaf Gold Cup, as Jamaica made it to the quarter-finals.

"That Gold Cup was like I couldn't do anything wrong," he said. "In the game against Guatemala, I scored twice. I scored against Grenada and we could have done better if it wasn't for a few individual errors.

"When we were going into the game against the USA, I remember that they were scared because of how well we were playing," he said.

Before the quarter-final match against USA, the Reggae Boyz secured maximum points in the group stage.

"The reason why we were playing so well, I think, was because we had a pre-tournament camp in Brazil and developed the chemistry from there," Phillips said.

Jamaica were beaten 2-0 by the USA.

The 36-year-old went on to win 72 caps for the Reggae Boyz while scoring 12 times.