Staying steady for silver in Doha 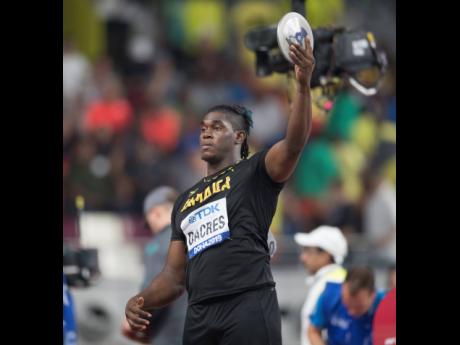 While reflecting on his 2019 World Athletics Championships discus silver medal performance, Fedrick Dacres attributed his success to being able to hold his nerve after an unusually long season.

The 26-year-old Dacres was speaking at a Gleaner Instagram live interview last week Thursday, where he discussed the challenges the sport faces in returning to action amid COVID-19, the country's potential in field events and returning to action this season.

Leading up to the World Championships in Doha, Dacres managed to set a new national record of 70.78 metres at the Diamond League meet in Morocco on June 16. By the time the World Champs started in October, Dacres said that his preparation was not ideal as the effects of a long season took its toll.

"I think I was a bit anxious and my technique was not where it was supposed to be. In terms of the whole technical preparation, I was not as ready as I should have been. We had a very long season, we started from May. We are not used to this long-drawn-out season," he said. "So for us to compete in October, it was uncharted territory and we weren't as ready."

Dacres noted that the final was more a battle of wills as the competitors were dealing with the effects of the extended season.

The best person was Sweden's Daniel Stahl, who took gold with a distance of 67.59m. Dacres, second with 66.94m, said that Stahl's technical ability, maturity and the partnership with his coach Vesteinn Hafsteinsson makes him an elite competitor.

"He is definitely a seasoned thrower. He has matured in the throws and he has a great coach. You can't really argue the greatness of Stahl unless you are going to speak about his coach. He has found a way to move that weight properly and efficiently, and that makes him very deadly. That's why he is so formidable," he said.