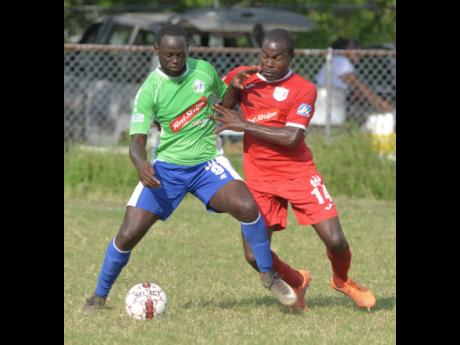 M ontego Bay United (MBU) forward Dino Williams, who has been on a long recovery road back after surgery, seems to be rediscovering his form after netting a brace in their 5-1 win on Sunday against Lilliput Rovers FC in JFF Western Confederation Charley's JB Rum Super League at the UDC field in Montego Bay.

Williams's goals came in the 2nd and 66th minutes to take his tally to five goals in what was the first match of the cross-zone (second half) of the Super League. Odane Nish (6th and 65th) and Nazime Grant (85th) were the other scorers for MBU.

Sandra Christie, operations manager and director of administration at MBU, said Williams has been putting in a lot of work to get back to his best. She believes her team will only get better as he reaches peak fitness and grows in confidence.

"He has increased his training regimen and is doing exceptionally well in terms of returning to core fitness in order to do better. Both on his own and with our fitness trainer (Simon Dixon) he has made significant strides towards physical fitness," said Christie, who believes the youngsters are feeding off Williams' growing confidence.

"As you can appreciate, Dino has been with us for a number of years as one of our most committed players. Most of our younger players do look up to him, without doubt, his confidence is representative of the team's confidence along with players like Keniel Kirlew and Donavon Carey. I must also commend the youngsters like Ronaldo Wellington, who was recently called up to the national team, his brother (Renaldo) and Odane Nish who have been doing very well," she added.

Williams, who underwent surgery on a groin injury in November of 2018, was arguably one of Jamaica's most prolific strikers leading the lines for MBU in their 2014 and 2016 Red Stripe Premier League titles before the niggling injury. The former Green Pond High School also played in the USL on loan with Indy Eleven and Charlton Battery.

MBU, who currently sit third on the 12-team table, has their sights set on securing one of two play-off spots for the nation's top flight.