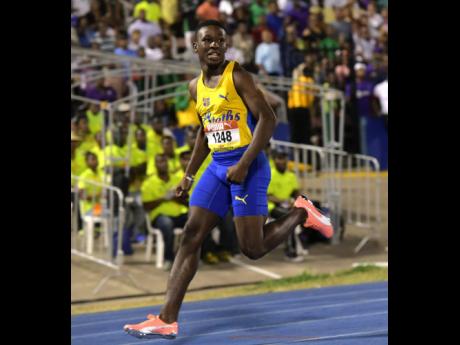 Dennis posted 10.86 seconds, a time well off his personal best of 10.20, to finish third in the Class One 100m semi-finals to qualify for Saturday's final.

In explaining Dennis' current form coach Renaldo Walcott told STAR Sports the young sprinter in on a 'journey to rediscover himself''. Dennis, who two years ago, was one of the fastest Under-18 athletes in the world, had been sidelined by injury for more than a year.

"Being away from the track for some two years (he is now) finding himself again. He started training literally in January so we are miles behind everybody. He is just on a personal journey to rediscover himself," Walcott said.

Dennis will be up against a quality field in the final at STETHS with the likes of national Under-18 champion Ackeem Blake of Merlene Ottey High, who posted the fastest time overall of 10.61 seconds and Rusea's High's Jevaughn Whyte (10.69s) for second place ahead of Dennis in the first semi-final.

In the second semi-final the leading lights were Rusea's High's Raheim Scott (10.75) who won ahead of Dennis teammate Conroy Jones (10.85) and Izani Barrett (11.05) of Herbert Morrison.

Walcott said it will be tough for Dennis to win the event.

"The competition in the west is tough, which does provide a good stepping stone in Champs preparation. You can have multiple Champs medallists in the same race and there is no telling who is going to win," Walcott said.

Roderick Miles, coach of Rusea's, described the race as a 'must-watch' and is hoping one of his athletes can rise above the challenge.

"The 100 metres is a must-watch because a lot of quality is out there. The west is very strong this year. And then when you look at the 200m to include Watson," Miles said.