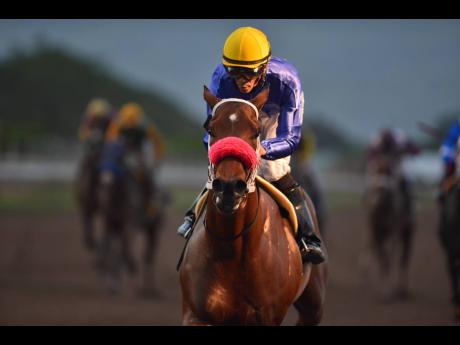 SENTIENT gets what schoolboys call another "bat up and ketch", a grade-one horse masquerading in 'conditions races', each being easier than the last, Saturday's 'restricted overnight allowance' fielding at least four runners, who belong nowhere near the event.

That makes SENTIENT the banker of the day to reel off three consecutive victories, events in which his rivals had, now made even worse, as good a chance as a snowball in hell against the Superstakes and Diamond Mile-placed runner.

Reverting three-year-old maidens to four furlongs straight, three of which stack the 11-race programme, two months before the season's first classics at a mile apiece, appears more in the vein of trying to confuse punters rather than helping owners and trainers prepare for distance races.

Approach these blink-of-an-eye races with caution because first-time runners, though working well, can be unpredictable and might not appreciate the straight nor sprints, as opposed to morning workouts when cantering away from the winning post and galloping the last three or four furlongs.

Raw speed at four furlongs is all it takes for an alert first-timer to upstage a more advanced-looking rival, who, at exercise, would have had a 'running start' on the round course, creating a mirage of a workout at a longer distance.

Among the first-timers is Anthony Nunes' FANTASTIC FEELING, a $4.4 million Ham Stables Yearling Sale buy-back, whose dam, Bubbling Angeline, by Blue Pepsi Lodge, was second in the Oaks and third in the 1000 Guineas.

Sired by Sensational Slam, a New York-based run-on sprinter once owned by celebrity chef, Bobby Flay, FANTASTIC FEELING's last workout, an easy 1:01.1 from the gate, the last four furlongs in 46.4, should make her a winner despite the presence of experienced ELITIST, who is void of speed and terribly drawn at post-position two.

Nunes also has another first-timer, in the colts and geldings division, BIG UP YUHSELF, who is bred to sprint and has looked the part in the mornings. Bred Blue Pepsi Lodge-My Heartbeat, BIG UP YUHSELF is a full brother to CORAZON, coming off the dam line of Classique, a winner of 10 races, including the 1000 Guineas and Jamaica Oaks.

The champion trainer is eyeing a sweep of the four-furlong straight maiden races but tread carefully where his BORN DIPLOMAT is concerned in the first fillies' section. Dubbed 'Nunes' big bay' by the clockers due to her bulk, BORN DIPLOMAT had appeared a bit slouchy in the mornings but seems to have had some pep to her step since fitted with a tongue tie in January.

It wouldn't hurt to scout the race for speed which could be lurking within Steven Todd's TRIPLE SEVEN or Howard Jaghai's pair of LADY FAIZABAD and CHENNAI EXPRESS, both well drawn on the faster stands' side.