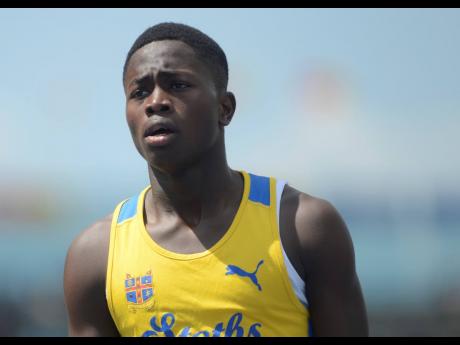 The girls' qualifier will take place on Thursday at Rusea's High School, before it all culminate on Saturday at the STETHS Sports Complex in Santa Cruz.

Rodrick Miles, coach of Rusea's, who is confident his girls' team can defend their fourth consecutive title, said their objective is to stamp their class with some real quality performances.

"The girls' team is in full flight and is ready and confident that we can secure a fourth title. However, we don't normally call a title until we actually win. For the boys, we usually strive for quality performances and over the past five years our objectives of top five at Western Champs and top 10 at National Champs have been met," Miles said.

"I'm looking forward to the girls dominating and actually showing some class in the west. It's not a big team like in years gone by but it's a quality team. We are looking for some quality performances led by captain Aliesha Shaw, as we have about seven persons on the team that would have represented Jamaica at some point."

Renaldo Walcott, coach of STETHS, who is defending boys champion and placed third for girls behind Rusea's and Petersfield last season, said they have their sights set on topping last year's performance.

"The male team is ready to defend their title. It's hard to improve when you're in first place but if we could widen the gap that would be nice," Walcott said.

"The girls came third last year and we were miserable with that position so we definitely are planning to change that for the better. I just want both teams to give of their best individually and ultimately as a unit," he added.