A massive win for Holland Utd 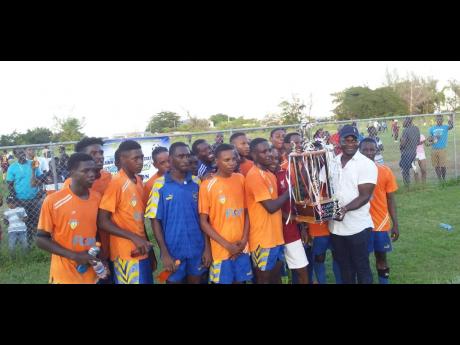 Jeremiah was pleased with his team's achievements as it is made up of players with an average age of 19.

"It is a massive achievement. You can see the joy on these boys' faces. A lot of them have won Under-17 and -18 but now they have beat two Confed Super League teams and Falmouth that they didn't beat lost to the team they beat in the finals. Now, they can feel like a top team in the parish although they are youngsters, so this is a massive statement," Jeremiah said.

"I wanted them to learn to play in high-pressure games so to have made the finals, I knew coming here today would be a big moment for them and their development. I am happy we capped it off with winning the trophy because it shows that whatever we are doing helps their progress, as a lot of them are schoolboy footballers ... For me, if we didn't win today, I still would have been happy that they would have experienced a senior football final in the parish."

Jeremiah, who believes he has sent a message to the parish football department, noted that he wants to see football in the parish improve by involving young footballers at the senior level.

"For me, it is important. I remember one year we were in the confed (Super League), I played Christo-Jay Daley and another youngster against Sandals (South Coast) and Aaron Lawrence came over to me and said, 'Coach you're one of the bravest I've seen to play two 14-years-old at this level'," Jeremiah said.

"I want them to know, if they can, make that transition to send a message to this parish. I'm not saying throw away older players but we have to trust the youngsters. If the parish football product is going to build, then our youngsters will have to play more senior football than they are doing now."