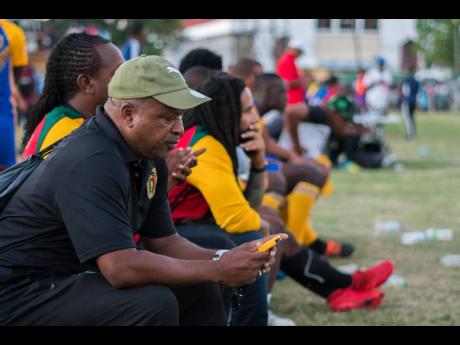 Lenny Hyde (left) sits on the bench of Falmouth United, along with owner Ky-mani Marley, during a Western Confederation match against Montego Bay United on December 8, 2019.

After an exciting opener to the JFF Western Confederation Charley's JB Rum Super League where they dominated former Premier League relegated Montego Bay United (MBU), Falmouth United is optimistic about the season ahead.

Falmouth, formerly Village United, have certainly stepped up their quest to qualify for next season's Red Stripe Premier League after an aggressive summer transfer window. They brought in five of the better players from Faulkland FC, who narrowly missed out on qualification to the Premier League a few months ago as well as five others.

The Trelawny-based team believes they were a bit unfortunate to not take maximum points after they played out a 1-1 draw with the 2016 Premier League winners. Radcliff Dawkins netted for Falmouth United in the 35th minute before Nazime Matalie-Grant scored a late equaliser for MBU from a stunning free kick in the 89th minute.

Coach Hugh 'Bingy' Blair said the coaching staff that also consists of Lenworth 'Lenny' Hyde was impressed by what they saw in their first game. He outlined that it will take some time for the players to gel and grasp the system of play, but confident they will get it right later on.

"After today we can move forward on a number of things that we see. Myself and coach Lenny Hyde are looking to go and work on these things on the training field. We need more people going to the box, we need more passing especially to the flanks, and the defensive side, we need to tighten up things a bit more ... We might have to start all over again with them to get them to play in a certain system of play," Blair said.

"This first match was brilliant. Also, the crowd came out and watch it so we want football to be a splendid thing in Falmouth again. We have the support of (Ky-mani) Marley and the rest of management so it's just a matter of time for them to gel," he added.

Blair noted that he is looking forward to the season ahead working with Hyde, who he described as a 'brilliant tactician'. Hyde, who led Clarendon College to back-to-back Olivier Shield title to follow their daCosta Cup title defence a week earlier, takes over from Dr Dean Weatherly, who was charged with the objective of taking the team to the Premier League in their first two seasons.

"Yeah, we are looking forward to the season with him (Hyde). He is a brilliant tactician, and also his technical work with the ballers that just need to grasp the vision and concept. Whatever we do in the evening time (training) the players just need to take on so when we go on the field they can display it," Blair said.

"You see how Clarendon College playing football. He has those youths for some time now. We want to get things set like that but it's going to take some time."