Hyde takes over at Falmouth United 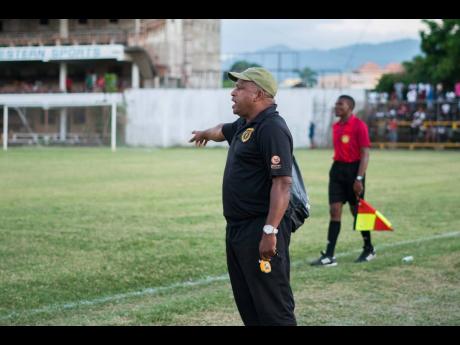 Lenny Hyde instructs Falmouth United’s players from the sideline during their Western Confederation match against Montego Bay United at Jarrett Park on Sunday.

Fresh off his Olivier Shield win with Clarendon College on Saturday, coach Lenworth 'Lenny' Hyde seems to have taken over as head coach of Falmouth United.

He was spotted directing traffic from the technical area of their opening game of the JFF Western Confederation Charley's JB Rum Super League at Jarrett Park on Sunday.

Radcliff Dawkins netted for Falmouth in the 35th minute before Nazime Matalie-Grant scored a late stoppage-time equaliser with a stunning free kick.

Hyde takes over from Dr Dean Weatherly, who was charged with the objective of taking the team to the Premier League in their first two seasons. He is optimistic about the season ahead as they look to book a place in next season's top-flight competition.

"By January when the transfer window opens, we will acquire some more new players. My aim is to bring the team back to the Premier League. This was a Premier League team named Village United with quality players like Dino Williams. They have football culture, and my job is to get them back to that level," Hyde said.

Hyde, who noted that he admires owner Ky-mani Marley's vision for not only football, but community development, says he wants to challenge himself to bring back the love of football to youths in Falmouth.

"He loves that game of football and youth on a whole. He is trying to develop the community again. We have a lot of youths around the community that he wants to get back into football. That is why I took up the challenge to try and help him because he is doing a wonderful job with the youths," Hyde said.

When asked about him coming in fresh off the back of a successful schoolboy football season, Hyde told STAR Sports: "It was never a problem. It's something that I love and, you know, when we are doing things, we want to give it our best."