They got their chance – Whitmore - ‘Tappa’ promises change after disappointing draw 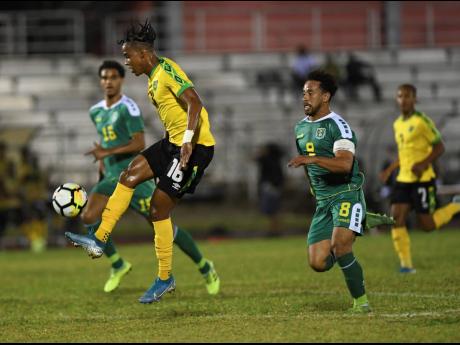 Jamaica’s Peter Vassell attempts to control the ball while being pursued by Guyana’s Samuel Cox in their Concacaf Nations League encounter at the Montego Bay Sports Complex on November 18, 2019. 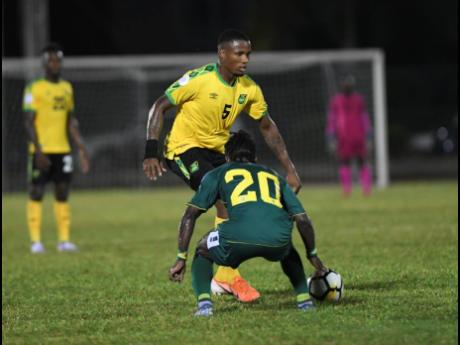 Following Monday night's disappointing 1-1 draw with Guyana at home, Reggae Boyz head coach Theodore 'Tappa' Whitmore has hinted that some of the players he fielded will not make the cut for next Gold Cup and the hexagonal round of World Cup qualifiers next year.

Whitmore went into the game with a heavily rotated squad in order to get a full grasp of the capabilities of all of the players who have been working in the national programme.

But their failure to break down the Guyanese defence consistently, a feat the team managed to achieve two months ago when they registered a 4-0 scoreline on South American continent, makes Whitmore want to look elsewhere to get what is needed to qualify the team to next FIFA men's World Cup, scheduled for Qatar in November 2022.

"This is something I keep talking about, not just Monday night, months ago. I keep challenging players because come 2020 it will be different. They have to understand that it will be a different ball game and neither the public nor the players can say they weren't given an opportunity," Whitmore said.

"Time and time again, players have come to the national team and try and blame everybody when they are the ones to take responsibility. It's neither here nor there to me because I'm doing what's right for the team and the country," he added.

Whitmore outlined that there are persons who have been critical of him to say that he has not been giving some players the opportunities. He, however, noted Monday's performance by a rotated team is a clear indication of his position.

"My take on the game is that it is a twofold thing. At one point in time, you hear that the coach not giving players a chance and now you see. If we can't step up against a Guyana in terms of players not performing, then where do we go from here?" Whitmore asked.

"They got a chance to show what they can do, so if you're not pleased with it at least they are getting a chance."