Barrett knew Sinclair would do well in shooutout 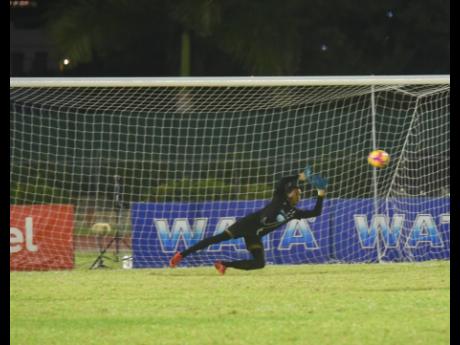 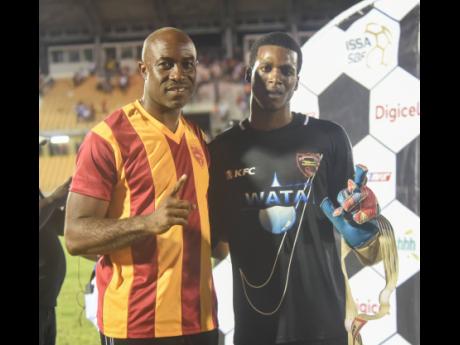 Cornwall College’s assistant coach Warren Barrett embraces Peter Sinclair after he stops a penlty kick in the semi-final of the ISSA Champions Cup in 2018.
1
2

Cornwall College's goalkeeper Peter Sinclair, who came up big to send his team to the semi-final of the ISSA Champions Cup, said he was confident of a top performance when the game went down to penalties.

He pulled off a brilliant save on St George's first kick that arguably forced the second kicker wide of the left upright. Although he didn't manage to save the third and fourth kicks, with CC conveying three of their five Sinclair took his own time for the last kick the played mind games on St George's last kicker who eventually missed all end up.

After similar performances last year in the semi-final of both the DaCosta Cup and in the Champions Cup (also against St George's), Sinclair said he relishes these kind of opportunities.

"Of course (I relish the opportunity). I had to come out with my A-game and execute in order to get the win," said Sinclair who added that assistant and goalkeeper coach Warren Barrett brief words before the shoot-out gave him high confidence.

"He (Barrett) just told me, he knew that I got it because I'm a great penalty stopper. We were in high confidence before the kicks because we knew that we had to win with me in goal. And also, with the team's belief in me I knew I had to do it," he added.

Sinclair described Barrett as more than a father to him and said the impact of the senior Reggae Boyz goalkeeper coach has been a difference-maker in his game.

"He is more than a father and a great impact on my life. Without him I wouldn't be where I am today," Sinclair said. "I remember 2017, when I just started, I couldn't catch a ball and that's just two years ago. He believed in me and continued to work with me until I climb up the ladder now. I just have to continue putting in the work and believe in the process."

Despite his penalty, save his most spectacular save came on the stroke of relegation time parrying a powerful on-target header from a corner kick over to bar.

Barrett, who was impressed by Sinclair's performance, said he was confident he would pull it off for them even though he is still not at his sharpest.

"I was very impressed with Peter's performance. From last year, he has been doing well. This season has been a rough one for him and some of the other players. He came into the preseason with an injury from last year and it hampered his preparations throughout the months of July, August. He was in and out of training so I still don't think he is where I personally would want him to be. However, he is putting in the work and his experience from last year has served him well. He was born with the ability to stop penalties so once it went down that route we were pretty confident," said Barrett who was the goalkeeper for the Reggae Boyz 1998 World Cup squad.

When asked if he told Sinclair anything in particular before the kicks, Barrett said he doesn't want to let the 'puss out of the bag'.