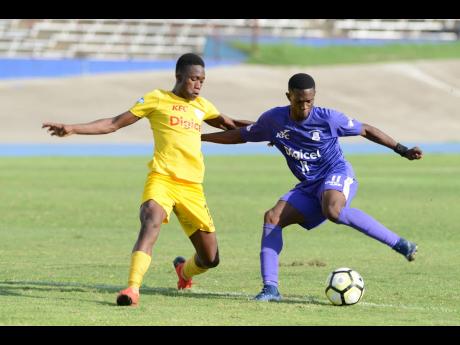 Th e highly anticipated lucrative 2019 ISSA Champions Cup kicks off this weekend and defending Mannings Cup champions Kingston College (KC) and Garvey Maceo (Cubans) are expected to adorn the Stadium East field with some magic in the late game of the double-header.

But today, the ball will start to roll when Dinthill Technical High battle Excelsior High at 4 p.m. before Clarendon College take on Wolmers Boys at 6 p.m. in another Stadium East double-header.

Coach of KC, Ludlow Bernard, made it clear that winning the Champions Cup is high on 'The Purples' agenda and he has already identified Garvey Maceo's strengths and will look to nullify their midfield to get the better of them.

KC, who boasts a one hundred per cent win record, will go into the match off the back of a 5-0 win over Charlie Smith High in the quarter-finals of the Manning Cup yesterday.

"Yes, we will be fielding a strong team. All trophies at stake are there for the taking and that's our attitude towards this and all and other trophies up for grabs this season," Bernard said.

"There is a very good player in their central midfield. He seems to be the one pulling the strings for them. I can only go by the results and they seem to be getting favourable results. They, unfortunately, they lost out in making the semis of the daCosta Cup. We figure, however, by virtue of making the Champions Cup they must have had some quality. Garvey Maceo, traditionally had always been a good team to contend with in schoolboy football and we look forward to playing them."

Merron Gordon, coach of Garvey Maceo, said regardless of the name and clout of KC they are focused on winning both titles within their reach.

"We have two cups to play for and we are going as hard as we can for both," Gordon said. "Same approach. I scout a team and plan tactically with my team. We will just have to find their strengths and weaknesses and then counter them."

"It's always a good experience for the kids. It's another football game, a tough school with a big name in terms of football and other things. But, I believe in my boys, their ability and we are coming here to put on a good show," he said.