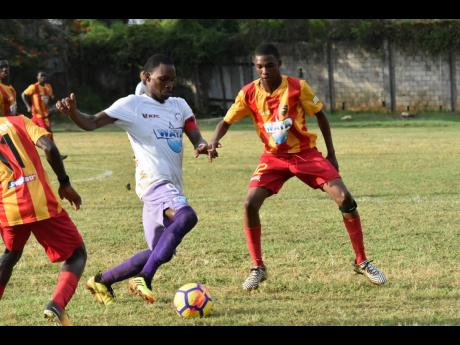 A hat-trick from Brandon Curate help 12-times champions Cornwall College(CC) advance to the semi-finals of the ISSA/WATA daCosta Cup with a 3-0 victory over Maggotty in quarter-final action at Jarrett Park, yesterday.

Curate netted his first goal from a controversial penalty kick on the stroke of half-time. He latched on to a Denque Ricketts pass from over the top, then slot home with his favoured left foot. The boys from Orange Street, Montego Bay, were awarded another penalty 12 minutes later that Curate also converted to complete his hat-trick.

The win puts Cornwall atop quarter-final group two with seven points, one ahead of Garvey Maceo who defeated host Manchester 3-2 in the other group game.

Curate delivered a brilliant performance on the eve of his 19th birthday to take his goal tally to seven so far this season. He is happy to be back in action after being ruled out with a knee injury for the past two years and is also looking forward to carrying his good form into the semi-finals.

"It's a very joyful feeling after sitting out two years due to injury. So coming back in this my third and last year and getting things done for my team is a proud feeling. I am also really excited to be in my first daCosta Cup semi-finals," said Curate who transferred from Herbert Morrison Technical in 2017.

"Yes, I'm looking forward to the daCosta Cup semi-finals and final. I'm planning to do the same thing or even more. Coach has his plans so we just need to go out and execute."

Warren Barrett, assistant coach of Cornwall College, who was most delighted with the win and semi-final spot, applauded Curate's hat-trick performance.

"We needed to win and win comfortably as well to give ourselves as best a chance as possible to qualify for the semi-finals. I have to congratulate Brandon, he has been working hard all season and has been getting goals for us. Even when he doesn't start and have to come off the bench, you can always see the difference that he brings, ..." Barrett said.