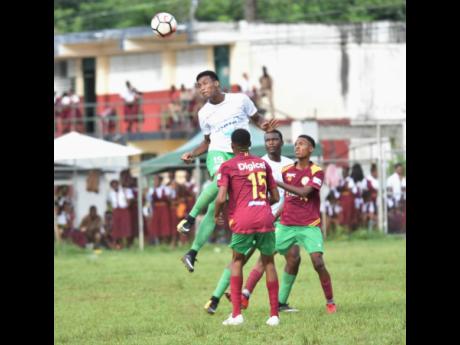 Frome Technical High School central defender and captain Clifton Suban, who has led his team to the quarter-finals of the ISSA/WATA daCosta Cup, has credited his defensive prowess and leadership to last season's stint in the JFF/Charley's JB Rum Super League with Sandals South Coast (SSC) FC.

Suban scored his first goal of the daCosta Cup in Frome's 5-0 win over Petersfield High School in their first match of the quarter-final group stage at the Frome Sports Complex on Wednesday.

After helping Frome to the semi-finals of the daCosta Cup last season, Suban was rewarded a place in the SSC FC squad by Aaron Lawrence, who coached both teams before taking up a coaching job with the Turks and Caicos national team.

"The (Super League) experience was great. It helped me to play against a lot more experienced players with lots of talent and ability. It also helped to build my confidence which prepares me for big games against any opposition in this competition," said Suban.

"Our objective was to not concede any goals in this quarter-final round. We didn't want to concede any at all in the competition but, unfortunately, we've let in six soft ones. However, we have done some work and is focused on continuing to work as a team on improving. It's my job to bond with my teammates and follow instructions if we are to come out and do the job on each day," he said.

Suban, 18, who is playing his last season in schoolboy football despite being in lower six, said his personal goal is to lead Frome to their second daCosta Cup title and others if possible.

"Yes, I would want to lead my team to all three titles if possible as this is my last season. However, the daCosta Cup title is where our primary focus is," said Suban whose dream is to become a professional football player or an engineer.