Centenarian not fazed by inclement weather 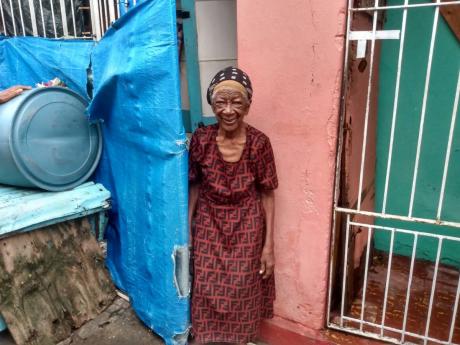 Myrtle Smith outside her home. 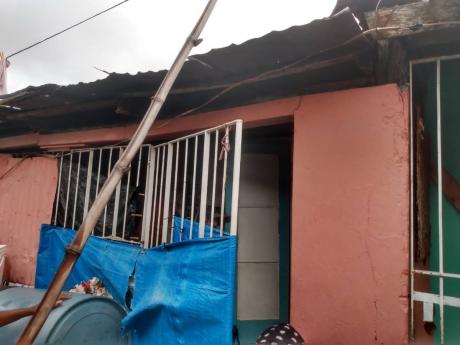 The leaky roof that Smith has to deal with.
1
2

"Is cook I was just going to cook, enuh," centenarian Myrtle Smith told THE STAR team as she flashed a wide and welcoming grin.

Yesterday, the rain had just subsided and Smith, who is 102, had spent a great portion of her morning sweeping and bailing water out of her Wildman Street, Kingston, dwelling. She shoved her feet into a pair of damp shoes before stating that although the place she has called home for more than six decades is far from sturdy, she is still counting her blessings.

"All day yesterday and today mi in dere a bail out water because water a drain down so mi have to set bucket in dere. Mi would want it to fix up but mi nuh have it now. But mi still give God thanks, enuh," she said.

Smith lives in a one-bedroom dwelling but said this is purely by choice as she is more than welcome to live with any of her four children. Her neighbours, however, are extremely concerned about her living conditions especially since the island is currently being belted by heavy rainfall.

"She very independent, enuh. She don't allow anyone in her house at all. She independent like that but I know she don't have a bed in there. In there really wet up bad when the rain fall so she sit outside on her little verandah on a hassock and sleep. The rain still blow in on her although she set garbage bag and a piece of tarpaulin to try block out the rain but the water still wet her," a neighbour said.

The neighbour added that although Smith is extremely independent, she is having health issues and they are hoping that she will receive assistance to making her living conditions more comfortable.

"She not doing too well now but she very active. She likes to stay active man because she will wash, clean and cook for herself. She likes living here, this is her home. So if someone could just fix up the place for her it would be nice so she can be comfortable," the woman said.

Smith was born on April 7, 1921, in Auchtembeddie, Manchester, but relocated to Kingston in 1963. Prior to moving, she worked as a postmistress in Trelawny, and did domestic jobs to care for her five children, one of whom is now deceased. She keeps her blood pumping by walking.

"I walk to Cross Roads and almost everywhere. Even when gunshots a fire, I am on the road. Is last week Tuesday a policeman stop and ask mi if mi okay and ask mi age and when I tell him 102, he was frightened because him say mi walk strong. I walk and exercise man," Smith said.