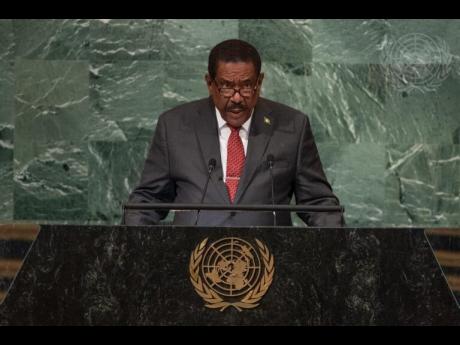 UNITED NATIONS, Sep 22, CMC – Dominica on Wednesday strongly criticised Russia’s invasion of Ukraine “without reservation”, saying that the invasion of one country by another must always be condemned.

“There will always be differences and conflicting interests between countries, but there must be a better way in this 21st century to avoid invasion and war as a mechanism for resolving differences or conflicts,” said Dominica’s President Charles Savarin in addressing the 77th Session of the United Nations General Assembly Debate.

“The developments since 2014, which have led to the Russian invasion of Ukraine in 2021, are well known. Nevertheless, we in Dominica are of the view that this invasion and the ensuing war could have been avoided.”

Savarin said Dominica held firmly to the principle that international disputes should be settled through negotiation and arbitration and not through war.

“We hold that might is not necessarily right. Whatever argument may be put forward, the terrible toll being inflicted on the people of Ukraine in terms of loss of life and destruction of their towns and cities is unacceptable.

“The Commonwealth of Dominica, therefore, stands with the rest of the world in calling for an immediate cessation to the conflict, which continues to rage in Ukraine.”

The Dominican president pointed out that the conflict had led to skyrocketing prices of oil and petroleum products and, as a result, a rise in the cost of electricity, all aspects of transportation, and production of goods and services.

“This conflict has created a shortage in the world’s supply of grain with implications for hunger in countries which rely on imports of grain from these two countries,” he added.

It was against this background that he said Dominica welcomed the deal brokered between Ukraine and Russia, with the assistance of Turkey, ably supported by the UN Secretary-General, to have significant quantities of grain shipped from Ukrainian ports to various destinations and “thereby alleviate the emerging global food crisis.”

“For these reasons and in the interest of global peace, the Commonwealth of Dominica urges all parties, to continue upholding their end of this agreement, so that further relief can be felt globally as a result,” Savarin said. “We urge the United Nations to continue its efforts to broaden this opening and, thereby, usher in wider agreement between the parties and to bring this war to an end.”

Addressing the trade and economic embargo imposed against Cuba which he said continues to be of “great concern to us in the Caribbean,” President Savarin said that the lifting it had become “more urgent in light of the global impact of the

He added Dominica’s voice to the overwhelming majority of UN members calling for the immediate lifting of the “unjustified trade restrictions and export bans imposed on the good people of Cuba”.

“It has long been established that whatever the objectives were 60 years ago when this embargo was instituted, it can no longer be justified, if it ever was,” he said.

“The Government of Dominica, therefore, strongly urges the few states who continue to support these sanctions to heed the call of the overwhelming majority of us gathered here, and lift this archaic and unfair embargo against Cuba, and let us all support the full integration of the Cuban people into the global financial and trading systems.”

Similarly, he called for the immediate lifting of the “unjustified oil embargo and other general sanctions imposed on the people of Venezuela”.

“Despite the implementation of those heavy and unjustified sanctions, Venezuela continues to provide meaningful technical and financial assistance to it regional partners,” Savarin said. “This is quite evident through the benefits being derived from the Petrocaribe Energy Security Agreement through the ALBA Caribe Fund.”

“It is further incumbent upon all of us to provide short and long-term solutions and opportunities for Venezuela to resolve its challenges and quickly improve the lives of ordinary Venezuelans,” the Dominica president said.

Additionally, he said the situation in Haiti also continues to be of “great concern to us in the Caribbean” and required greater international attention.

“The international community needs to respond as if Haiti was under invasion, as is the case with Ukraine; or as it did in a post-war reconstruction situation, as was the case with Europe after World War II, requiring a so-called Marshal Plan,” Savarin said.

“Nothing less can overcome the deep-rooted reconstruction challenges facing Haiti. We, therefore, urge this UN family to forge an effective, unified response that brings to bear the necessary resources financial, technical and otherwise, to alleviate the suffering of the Haitian people.”