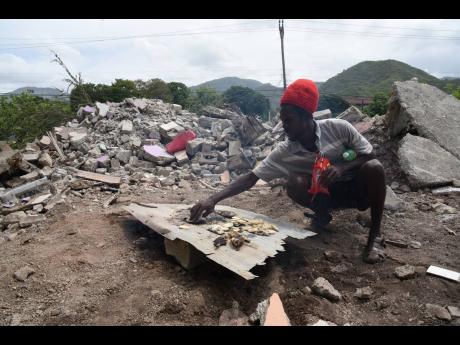 Orlando Joseph roasts fish and crackers on the spot where his bedroom used to be. 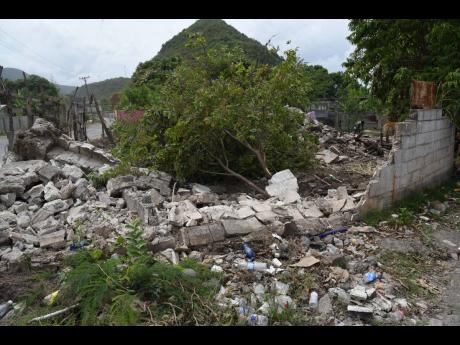 Rubble is all that’s left of the Joseph family home in Nine Miles, Bull Bay, St Andrew, which was demolished to facilitate the new highway.
1
2

Yesterday the Rastafarian was roasting fish in the space that used to be his bedroom. It was now all rubble.

"A here suh mi born, literally. Mi never born at a hospital, enuh. Right now, mi nuh feel good. Mi never stand up to watch dem take down the house because mi heart isn't so good. Dem run wi inna street, Rasta," Joseph said. Joseph said he is now forced to 'kotch' with someone, while his children and babymother are elsewhere. He stated that while some may see the six-bedroom house, which housed seven persons, as an old building, for him it was a part of his family's history.

"This house was over a 100 years old, it belonged to my grandmother, so a piece of family history was destroyed," he said. Adding to his discontent, Joseph said that the compensation that he received is insufficient.

"Dem give we a little change, but that cannot even build one room. Yuh know like when yuh fada give yuh a ting and say him a give yuh a start inna life? Well, a supm like dat dem do," he said. While he did not disclose the exact figure, Joseph said the family was given money for rent and another cheque for the house, but he said this is far below what the property was valued.

"Mi think mi get rob. Them might a look pon di house and say it old and dem can give mi change for it, but that cannot buy material, that cannot pay workman. That type of money that dem give is ice cream money. Even if mi use di ice cream money buy di material dem, how mi a go get the building up? Mi just did wah di man dem put dem self inna mi shoes and use dem discretion. Mi just wah get back mi joy," he said.

Joseph said that he and his brother were paying taxes for the land in their grandmother's name, unaware that after a certain time they could apply for their own title.

"We pay the money all the time, and not even the people who a collect the money never even tell we say we could sort it out. Now when dem people here come and we a show dem di receipt say we a pay we property tax, dem say we can't get pay for the land without title," Joseph said.

National Works Agency's Communication Manager Stephen Shaw said there are certain parameters that are taken into account when determining how much families receive.

"The acquisition of land is being managed through the National Land Agency (NLA). They are involved because the work is a joint process and involves surveyors and engineers from our section of government, meaning the works portfolio. Generally speaking, with all valuations that are done on the island where you want to ascertain the true value of a property, or in this case, the property is being conveyed and you want to know what the market price is, the NLA has its process that it goes through and it determines what the market price is," he said. Shaw said an offer is then made to the bona fide owner of the property.

"There is always room for counter-offers but it cannot be a counter-offer that is a pie in the sky. Once all the issues are taken on board then an appropriate value, if it is separate from that which was put forward by the NLA, is decided on and the process moves forward," Shaw said.

The massive project involves the improvement of the alignment from Harbour View Roundabout in St Andrew to Port Antonio, Portland. A four-lane highway is being constructed from Harbour View to Albion in St Thomas.

The highway corridor will include the acquisition of over 600 parcels of land, and will impact approximately 391 structures to include homes, church, schools, clinic, grocery shops, hairdressing parlours, jerk huts, commercial businesses, retail establishments, home gardens and a section of the Bull Bay football field and office building.