Fathers encouraged to read to their children 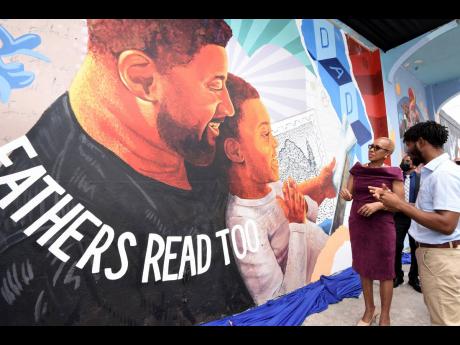 Anthony Smith explains the concept behind his mural ‘Fathers Read Too’ to Fayval Williams (left), minister of education and youth.

Education Minister Fayval Williams is urging parents, especially fathers, to dedicate at least 30 minutes daily to reading to their children.

"Reading together brings comfort and assurance and happiness to your children. Giving a child time and full attention when reading a story tells them that they matter. Reading feeds their imagination and is one of the greatest gifts a father can give. We want the fathers especially to get involved. It is fun and it has great benefits for children," she said.

Williams was speaking yesterday at the unveiling of the Father's Day Mural on Church Street in downtown Kingston. The mural, which is dedicated to dads across the island, was painted by 25-year-old artist Anthony 'Taoszen' Smith and is a part of the 'Fathers Read Too' campaign. The colourful artwork depicts a father cradling his child while reading a book. The piece was commissioned by the Ministry of Education and Youth in partnership with the Kingston and St Andrew Municipal Corporation.

Williams stated that while many people acknowledge that reading is important, many do not do it enough with their children, and this is eventually reflected in the national literacy rates, especially at the primary-school level. Recent studies, she said, show that time spent looking at electronic devices such as computers and tablets is increasing rapidly, while reading is declining. When used appropriately with a parent, technology can provide an important route to reading, but books should not be set aside. Williams added that fathers are now more involved in their children's lives than it was estimated years ago.

"Many of you know that the Bible speaks to a time when the power of the father was the primary authority of the family. When his word was unquestioned and his decision final. At the turn of the 20th century, the world began to radically change with the social, economic and technical advances; and with those advances came a basic change with the structure and function of the family, with a consequent shift of authority of the father. A father's influence increasingly seemed to be minor, and even negligible," she said.

"His (a father's) importance was defined by how well he provided for the family. In our generation, I am happy to say that tide is shifting. More and more resources are pointing to a need for fathers to be very involved in their children. Studies show that having a positive role model helps our adolescent boys develop positive gender-role characteristics, while girls are more able to form positive opinions of men," she added.