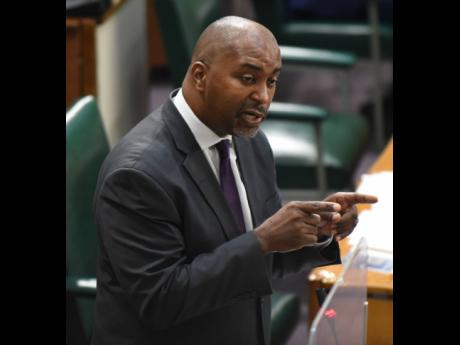 The plight of a once comfortable Jamaican, who is now struggling to make ends meet, was shared in Parliament yesterday by one representative as he sought to demonstrate how difficult life has become for many Jamaicans since the pandemic.

Julian Robinson, who represents St Andrew South East, a constituency that includes affluent areas such as New Kingston and the 'Golden Triangle' as well as lower middle income areas such as Vineyard Town and Swallowfield, said that the continued increase in the prices of basic food items coupled with increase in light bills threaten the future of many Jamaicans.

"There is a place in my constituency, very middle class area, where the cost of that property is millions of dollars. Dem own the property but nuh have the income. And when the lady called me first to ask for a food package, I didn't believe it until I went there," Robinson said.

He did not reveal the community from which the person called, except to say that the constituent's address would leave people in shock.

"There is real struggle, even for people who you may not consider to be in the category of the vulnerable. Earning people, monthly paid people, feeling it," said Robinson.

He said that gas prices have gone up by 40 per cent at the pumps since last year.

"We have seen a recovery in the economy, but let's not forget there are thousands of people who are not back to where they were prior to COVID," Robinson said.

"In this environment, there are people who are struggling under the pressure of these increases," he added.

Responding to Robinson, Prime Minister Andrew Holness said that his Government is aware of the level of hardship being experienced. He said that the cash transfer to 500,000 Jamaicans, made last year during the early stage of the pandemic, is an example of his administration's responsiveness to the issue.

"We have never forgotten the poor in this pandemic," Holness said.