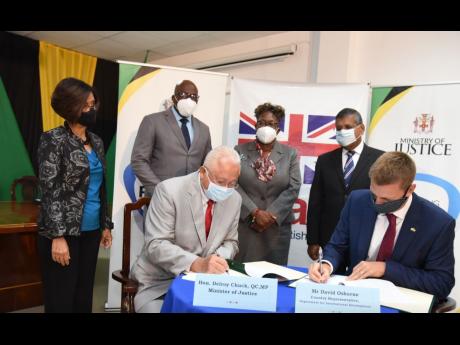 Minister of Justice, Delroy Chuck (seated left), signs a Memorandum of Understanding (MOU) with Country Representative, Department for International Development (DFID), David Osborne. The agreement, valued at £1,000,000, is intended to strengthen Jamaica’s anti-corruption framework by building the capacity of select institutions to improve accountability and transparency.

The Ministry of Justice has received funding of £1 million from the United Kingdom (UK) Department for International Development (DFID) for continuation of the Unification of Prosecutorial Services Project in Jamaica.

Portfolio Minister, Delroy Chuck; and Country Representative, DFID, David Osborne, signed a memorandum of understanding (MOU) for the support, at the Ministry’s offices in Kingston on Tuesday, August 11.

The funds will go towards strengthening the country’s anti-corruption framework by building the capacity of select institutions to improve accountability and transparency.

Minister Chuck said that the agreement will go a far way in addressing the long-held perception of corruption “in so-called high and low places”.

“Corruption threatens to erode the very fabric of our society. The job of going after corrupt officials is not an easy one and financial resources are a key component in the fight. That is why today’s agreement… is intended to play a pivotal role,” he noted.

Minister Chuck thanked the DFID for being “a critical and integral partner to Jamaica in supporting accountability and transparency in critical crime-fighting and ant-corruption institutions and through continued support to the justice sector”.

British High Commissioner to Jamaica, His Excellency Asif Ahmad, for his part, said he is pleased with the renewal of the MOU.

“This now takes us to a new three-year cycle… over the last decade, we have been working with you – Government Ministries, frontline law-enforcement officers, with the agencies – to achieve what you want, which is excellence and effectiveness,” he noted.

This is the second MOU to be signed under the Unification of Prosecutorial Services Project.

In March 2019, the Ministry received $51 million to strengthen the overall operations of the Office of the Director of Public Prosecutions (DPP). The funds provided for a review of the governance of the Clerks of Courts with a view to placing the officers under the supervision of the DPP’s office. The objective is to achieve harmonisation of prosecutorial services, by making the DPP responsible for all prosecutors in the court system.

The funds for the Unification of Prosecutorial Services project are part of the UK’s Caribbean Anti-Corruption Programme (CACP), which is mandated to strengthen the anti-corruption framework of Jamaica and the Organisation of Eastern Caribbean States (OECS) countries, by building the capacity of select institutions to improve accountability and transparency.

The programme is in line with the Ministry’s Justice Reform Implementation Plan, which is aimed at transforming the country’s justice system.