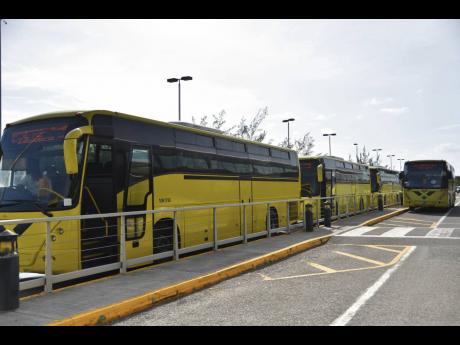 Fewer Jamaica Urban Transit Company (JUTC) buses have been rolling out over the past few months due to the novel coronavirus.

Paul Abrahams, JUTC managing director, said while there has always been a shortage of buses, many of them were not functional because spare parts could not reach the island due to the pandemic.

"There has been a little issue as it relates to spare parts coming in from Europe because of the COVID lockdown, so that has been causing a slow up of the buses. All of our purchase orders were in limbo but now that Europe has opened up slightly, the parts are coming out. Most of our parts come from Europe so from March, the Volvo and MAN buses have been operating at about 25 per cent," he said.

The company has had a 30 per cent decline in revenues since March, as the number of people using public transportation shrank daily with schools and businesses either closing or laying off staff, as well as a large number of persons working from home. Abrahams said this has caused the buses to be operating on a daily schedule.

"This has tightened up our operations a bit because once we have parts issues, then we are going to have a problem. We have a roster schedule now because there is no school so we have a schedule now which is a lot less, and because of the seating arrangements, as it relates to passengers, we are adjusting our operation schedule by the day," he said.

Before the onset of COVID-19 in Jamaica, more than 200,000 people within the Kingston Metropolitan Transport Region, Spanish Town and Portmore, travelled on JUTC buses daily.

Prime Minister Andrew Holness in March issued a raft of restrictions, including on public transport. Under the order, the JUTC is required to only carry seated passengers.