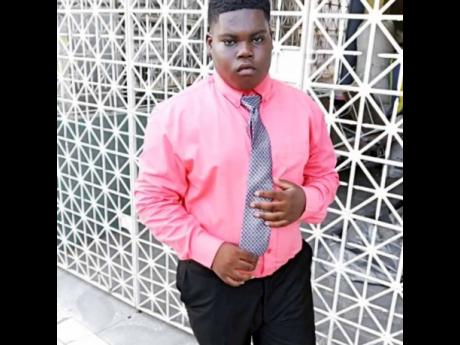 For all his life, Christopher Smith, 13, lived with a hole in his heart. His mother became aware of this condition soon after he was born, however, when he died July 24, his death still came as a shocker to her.

"When me see the crowd over the doctor office, me know say sumpn happen. A doctor tell me to lay down then she say 'Mother, him gone'. Me bawl out and me just start feel nervous, me belly fee like sumpn a dig it out when me realise say me baby dead," Christopher's mother, Sharon Ewart, told THE STAR. "Him born with a hole in his heart and me did even carry him go foreign to do an operation but the day when he died him never a feel no pain or nothing."

Ewart said she has not eaten since Christopher passed away.

"From yesterday me buy a patty and take two bites and put it down. All when a night, me nuh sleep right through," she said. "Him was a loving child, him tell me every day him love me, not a day don't pass."

Ewart said that despite his age, Christopher was "the man of the house".

"Him watch me money and protect my things like a him a the man of the house and a from him about seven him a move so," she said. Ewart says she feels as though she lost a father, as she reminisced on how Christopher cared for her.

"Last week him tell me say when me get old, a him a go look bout me. So me nuh know how him gone left me. A that me ask him when me see him on the stretcher," Ewart told THE STAR. "Him don't eat unless me eat. Even when him say 'Mommy, you a eat off all my food', him nah eat without me."

Ewart said that the morning before he died, Christopher gave her a portion of his partner draw to use for herself.

"Him always a try to take care of me. Nothing too good for him to give me. I just miss me baby a lay down beside me and hug me up and ask me for his breakfast a morning time," she cried.