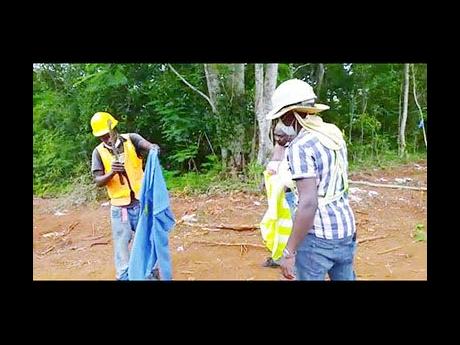 This man tries to remove a green lizard from the clothes of his co-worker.

An employee of the China Harbour Engineering Company (CHEC), who is working on the May Pen to Williamsfield leg of Highway 2000, was rescued from a bizarre 'entanglement' with a green lizard last Friday in Red Berry, Manchester.

For about three frantic minutes, the worker, assisted by residents and colleagues, searched for the lizard in his clothes, eventually stripping down to his trousers and boots. The offending lizard was then killed.

In what some residents consider a sign, the creature appeared when the worker and members of his team had gone to cordon a grave site that had been disturbed by the construction a few days earlier.

The residents had protested the manner in which the work got under way. They told THE STAR that several graves had been disturbed during the process.

Want back it nest

A woman said, "A di duppy, di duppy deh want back it nest ... a di duppy man. Catch back the duppy gi mi." While the search for the lizard was being undertaken, residents looked on in laughter and suspense.

"Unuh see how duppy dem down ya? A di duppy let out pon him. All dem a tek off the lizard, di lizard hang on," an elderly resident said.

"We afi go buy 31. A fuss me eva see a green lizard do a man suh. All when the lizard free him still a run towards that man. The lizard know a nuh the residents dem trouble dem place," another resident told THE STAR.

Though initially shaken, the worker, like his colleagues, joked about the encounter afterwards.

Following the visit, CHEC officials said that no more work is to be done on the leg of the highway construction until they have properly met with the residents.