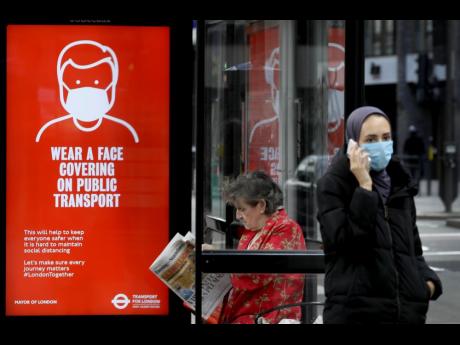 Passengers wait at a bus stop with a sign advising travellers to wear a face covering whilst travelling, in London, Friday, June 5, 2020. It will become compulsory to wear face coverings whilst using public transport in England from Monday June 15. (AP Photo/Kirsty Wigglesworth)

LONDON (AP) — The U.K. became the second country to officially record more than 40,000 coronavirus-related deaths as more than 100 scientists wrote to the British government on Friday, to urge it to reconsider lifting virus lockdown restrictions.

The government said another 357 people who had tested positive for the virus have died in the U.K. across all settings, including hospitals and care homes. That takes the total to 40,261, the world’s second-highest pandemic death toll behind the United States.

The U.K.’s actual COVID-19 death toll is widely considered to be higher as the total only includes those who have tested positive for the virus.In an open letter, the scientists urged the government to postpone further easing of the lockdown given the still-high level of daily virus-related deaths and new infections.

“Despite a two-month lockdown, we are still experiencing unacceptable daily numbers of deaths, still in the hundreds, and an estimated 8,000 new infections a day in England alone,” they said.

The scientists, many of whom work in infectious disease biology and immunology, are particularly vexed by the level of community transmission of the virus. They voiced worries that there could again be “exponential growth” in the number of cases and death.

Signatories include Professor Stuart Neil, the head of the department of infectious diseases at King’s College London; Professor Adrian Hayday of the Francis Crick Institute; and Professor Neil Fairweather of Imperial College London.

The British government says its easing of the lockdown has been limited and careful and is backed by the science.

Steps to ease the lockdown conditions in England over the past couple of weeks included the reopening of schools to some younger children and allowing groups of six people from different households in outdoor spaces, including in private gardens.