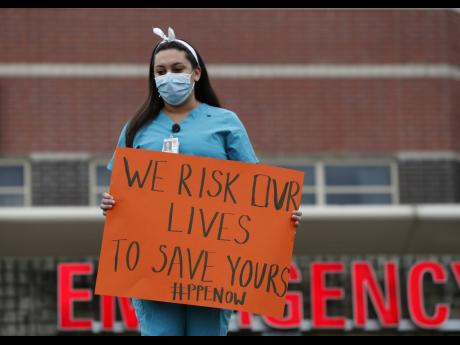 A nurse demonstrates outside the emergency entrance at Jacobi Medical Center in the Bronx borough of New York, Saturday, March 28, 2020, demanding more personal protective equipment for medical staff treating coronavirus patients. A member of the New York nursing community died earlier this week while treating coronavirus patients at another New York hospital. The city leads the nation in the number of COVID-19 cases, and the United States currently has the most cases in the world, according to the World Health Organization. (AP Photo/Kathy Willens)

BERLIN (AP) — The number of confirmed coronavirus infections worldwide topped 600,000 on Saturday as new cases stacked up quickly in Europe and the United States and officials dug in for a long fight against the pandemic.

The latest landmark came only two days after the world passed half a million infections, according to a tally by John Hopkins University, showing that much work remains to be done to slow the spread of the virus. It showed more than 615,000 cases and over 28,000 deaths.

While the U.S. now leads the world in reported infections — with more than 104,000 cases — five countries exceed its roughly 1,700 deaths: Italy, Spain, China, Iran and France.

The virus already has put health systems in Italy, Spain and France under extreme strain. Lockdowns of varying severity have been introduced across Europe, nearly emptying streets in normally bustling cities, including Paris where drone photos showed the city’s landmarks eerily deserted.

Spain, where stay-at-home restrictions have been in place for nearly two weeks, reported 832 more deaths Saturday, its highest daily count yet, bringing its total to 5,690.

As the epicenter has shifted westward, the situation has calmed in China, where some restrictions have been lifted. Six subway lines restored limited service in Wuhan, where the virus first emerged in December, after the city had its official coronavirus risk evaluation downgraded from high to medium on Friday. Five districts of the city of 11 million people had other travel restrictions loosened after their risk factor was downgraded to low.