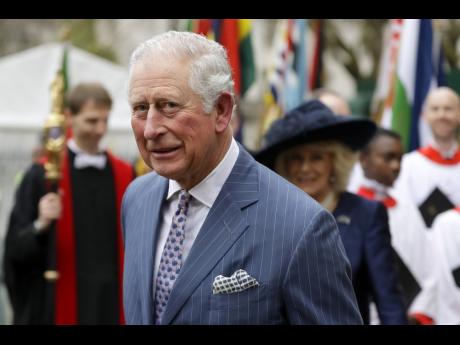 FILE - In this Monday, March 9, 2020 file photo, Britain's Prince Charles and Camilla the Duchess of Cornwall, in the background, leave after attending the annual Commonwealth Day service at Westminster Abbey in London, Monday, March 9, 2020. Prince Charles, the heir to the British throne, has tested positive for the new coronavirus. The prince’s Clarence House office reported on Wednesday, March 25, 2020 that the 71-year-old is showing mild symptoms of COVID-19 and is self-isolating at a royal estate in Scotland. For most people, the coronavirus causes mild or moderate symptoms, such as fever and cough that clear up in two to three weeks (AP Photo/Kirsty Wigglesworth, File)

LONDON (AP) — Prince Charles, the heir to the British throne, has tested positive for the coronavirus, royal officials confirmed Wednesday — touching off criticism over whether his wealth and status gave him priority in receiving a test.

The 71-year-old is showing mild symptoms of COVID-19 and is self-isolating at a royal estate in Scotland, the prince’s Clarence House office said. His wife, Camilla, 72, has tested negative.

“The Prince of Wales has tested positive for Coronavirus,” Clarence House said.

It said he “otherwise remains in good health and has been working from home throughout the last few days as usual.”

Britain’s Press Association, citing a source, said the prince and the duchess remained in good spirits, and that Charles was not bedridden.

Charles is the latest high-profile figure to reveal a COVID-19 diagnosis. He joins a growing list of celebrities, athletes and other famous people who been tested for the new coronavirus, even when they didn’t have a fever or other severe tell-tale symptoms.

That has fueled the perception that the wealthy and famous have been able to jump to the head of the line to get tested while others have been turned away or met with long delays.

Charles and Camilla’s tests were carried out by the National Health Service in Scotland.

A member of the Scottish Parliament, Joan McAlpine, expressed surprise that Charles was tested. McAlpine, a legislator with Scotland’s governing Scottish National Party wished Charles a speedy recovery, but wondered aloud whether he had received special treatment.

“Given that his symptoms are said to be mild, like many I wonder how he was tested when many NHS and social care workers cannot get tested,” she said on Twitter. “My nephew, who has serious asthma and a chest infection was recently refused a test.’’