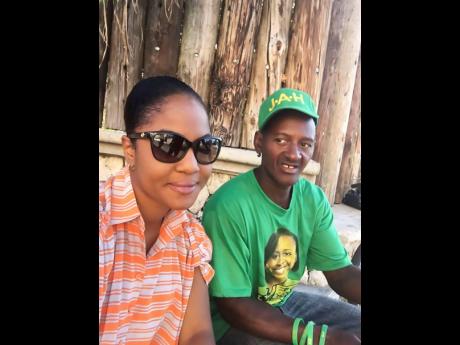 Speaking with THE STAR, Douglas described the deceased as a fun-loving person who was extremely loyal to his party.

"He was a very popular community person and one who was well loved. Despite our political differences, he had no issues joining me on the campaign trail - always decked out in green from head to toe, yet still supporting me as the PNP candidate. The entire community is in mourning," she said.

Reports from the Half-Way Tree police are that about 1 p.m., Laoe was at a cookshop when he was pounced on by men travelling on a motorcycle.

One of the men opened gunfire hitting him before escaping in the area. The police were summoned and Laoe was taken to hospital where he was pronounced dead.

When THE STAR visited the area where he was killed yesterday, a group of women, including family members, were tearful as they spoke about Laoe; they described him as a compassionate being.

"Shower Man was a very jovial person who everybody love. Every taxi man know him and although he doesn't live in Swallowfield anymore, every day he would be here," a relative said.

She stated that she was shocked when she learnt that he was attacked as he was a very familiar face around the area.

"A restaurant him a come from and is the same restaurant him go every day. When him almost reach the gas station, two man jump out of the gully on him and two others were on a bike. Mi really don't know why anyone would want to hurt him because dem man deh nah trouble a soul. All him do was work and take care of him loved ones," she said.

Over at the JLP Headquarters on Belmont Road, where Laoe was an employee, his co-workers were too grief stricken to speak with the media but said the office would release a statement today.