Pretti Don to marry her girlfriend 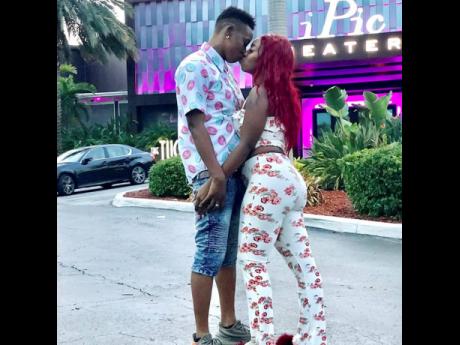 The wedding is set to take place in the United States.

Pretti Don, who popped the question to Parkes during one of her live sessions, said that although it has been just five months since they made their relationship official, she is certain that she has found true love.

Between a string of jokes and expletives, the comedian spoke about their plans for the future.

“Yuh know how long my wife a look me? ... two years now. She a look mi and inna mi inbox from mi did deh with the next girl who did come bring mi down in front of the whole world. Those times, mi nah read the message because my ex used to beat and chastise me. She used to mash up mi phone dem so is not like mi coulda chat to anybody,” she said. “When I met Camille, is like everything began to fall into place. We began travelling together and is like she became a part of me. My mother love her and we are planning to adopt a child but not before we buy our first house next year.”

She told The STAR that meeting Parkes in person for the first time was nerve-wracking.

“When mi finally meet her in person, mi all start tremble, mi get nervous so till all mi weed dash way. She had a lot of insecurities and thought I would go back to my ex, but I kept telling her that the ex was history. Bwoy, that never convince her because all during those times, she would never give me any sex. We just start have sex the other day,” she said laughing.

Last year, the 28-year-old shared her family secret with her more than 10,000 viewers, revealing that she was born with two different sex organs.

She, however, stated that sometimes she is an emotional roller coaster, because her physical conditions do not neatly fit the classifications of male or female.

Although her image is that of a stud in most of her social media videos, on other days she is sporting the wig, make-up, and shorts of her ‘girly’ personality.

“Sometimes, people will see me acting out the ‘Ling Ling’ personality, but this is because I am a hermaphrodite. There are days when I really feel like a girl and then there are days when I am Pretti Don; but on most days I am Pretti Don. This is one of the reasons why I knew that I had to marry Camille, because she understands me. I have no control over how I feel at times, it’s just my hormones working,” she said.

Pretti Don said that she is prepared for the backlash that she may face from persons who are against the homosexual lifestyles.

“I get backlash every day so nothing really bothers me. We just have to live our lives to please us. I cannot stop do a thing because another person doesn’t like it. If a person wants to hate me because I am doing what makes me happy, then to hell with them,” she said.