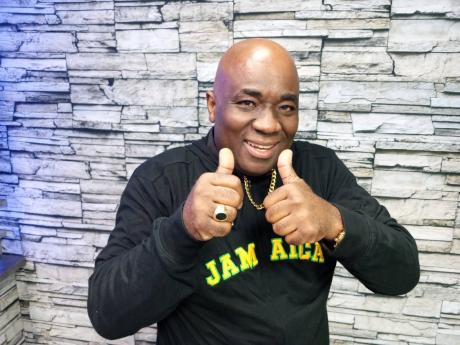 If you've ever watched Oral Tracey's 'Sports Commentary', news that he's pursuing a music career may not come as a surprise.

The programme sees the media personality airing his animated and unapologetic views with a delivery that incorporates witty rhymes, elements he's pulled together to write his single, In a Nikki House.

Produced by Yellow Leo Productions, D'Maverick Oral Tracey deejays about being the man of the house, unlike some men who play 'Mickey Mouse' in their relationships.

"Is a conversation mi a have with some brethren one day and mi seh to them, 'Some a unno a move like Mickey Mouse in a di woman dem house. Like unno in a di house and unno a nuh man in a di house - unno coming like part a di furniture'. A deh so the idea itself came to me," Tracey told THE STAR.

The music video has received more than 20,000 views since its premiere on August 28.

"Mi surprised seh most people nah cuss and ridicule mi, 'cause a dat mi kinda get off pon. Mi nuh like everybody a seh nice things 'bout me ... mi kinda surprised seh people endorse it so willingly."

Tracey used to perform at BBQs while attending Manchester High School. He recalled visiting studios and forming friendships with acts like Beenie Man and Ghost, and releasing the song, Camera Trick, under the moniker Dick Tracey in 2009 for Truckback Records.

"Because mi did get prominent in media, the whole studio and music thing did time-consuming, but mi never lose mi passion fi it," he said.

"A di writing of songs enable me fi do Sports Commentary how mi do it, and the flavour weh mi bring to it, because there's an entertainment component to weh mi do in a sports."

Tracey said he wants to make family-friendly music that keeps up with the times.

"Mi nah compete with Skillibeng and Ding Dong and Kartel dem, and mi nah do old-school song, neither... .The cake big enough inna di business weh everybody can eat ... . Yuh haffi pay attention to weh the hot people dem a do, but at the same time mi is an original thinker, that's why dem call me D'Maverick. Mi kinda figure seh there's a niche fi me carve out fi myself."

He lauded current chart-toppers like Skillibeng and Chronic Law and also saluted Vybz Kartel for "especially how him put him words together".

But Tracey isn't neglecting his media roles, and hopes In a Nikki House will be the start of a consistent music career.