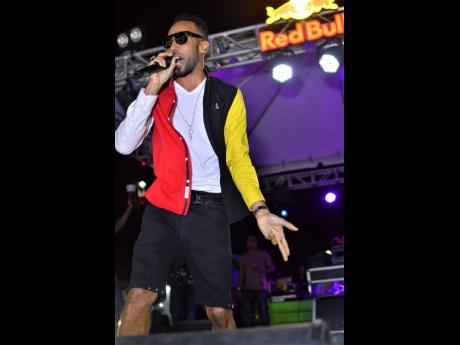 Singer-songwriter and actor Damian Beckett, known as Cham, was originally on the path to be a professional football player but detoured to the streets of dancehall.

"I think I'd be playing football for sure. I was really good, played for national team up to under-14 and then music came along," he said. "If not football, mmm ... I'd probably be a pilot, if my mom could afford to send me to pilot school." Cham is in Jamaica primarily to get word out on Lock Down, one of the tracks recorded on Usain Bolt's Clockwork rhythm.

Little did Cham know that football would find a place in his life other than being a favourite pastime. Earlier this year, Cham launched Beckett Management Group, an agency focused on sports management and investment. He also manages former Portmore United player and National Under-23 representative Venton Evans.

He shared "It's not something I was interested in at first. Venton knew I loved the sport but to be honest, I did not know if that was the avenue I wanted to take on especially because it takes up a lot time and responsibility likewise my music and brand, but he needed help."

Evans joined Fort Lauderdale CF in the USL League One and following an outstanding performance, has been added to the roster of the parent club Inter Miami, which is co-owned by former English professional footballer David Beckham.

"When he [Evans] came to me, he didn't know where to turn, out of a job and yearning to leave Jamaica, because sometimes people reach the ceiling and don't know where next. I knew him through his dad, learnt he was a good player and over time, during his visits to Florida the ideas were shared," Cham said. The artiste said that his love for football made him learn the game inside-out.

"So, in looking at agents, we had several sit downs and at the end of the day, like in music, when you picking an agent you go for who is passionate about the project, we went with the agent who we through was passionate about the Venton Evans project. Now he has an opportunity to work with top-class managers and top-class players in a seven-star facility where he can directly hone his skill. He has been doing well scoring a lot of goals and making a really good name for himself, so, hopefully he can take it to the next level," said Cham.

The Ghetto Story artiste said that music and sports "go hand in hand".

"Whether on the field, playing soccer, football or cricket, or on the stage, it's entertainment. We, as artistes are on the stage feeling like athletes, and on the track they, the athletes, channel their inner artistes and perform and then come in front of the cameras and speak. You have to love both, because they bring joy to people," Cham said.